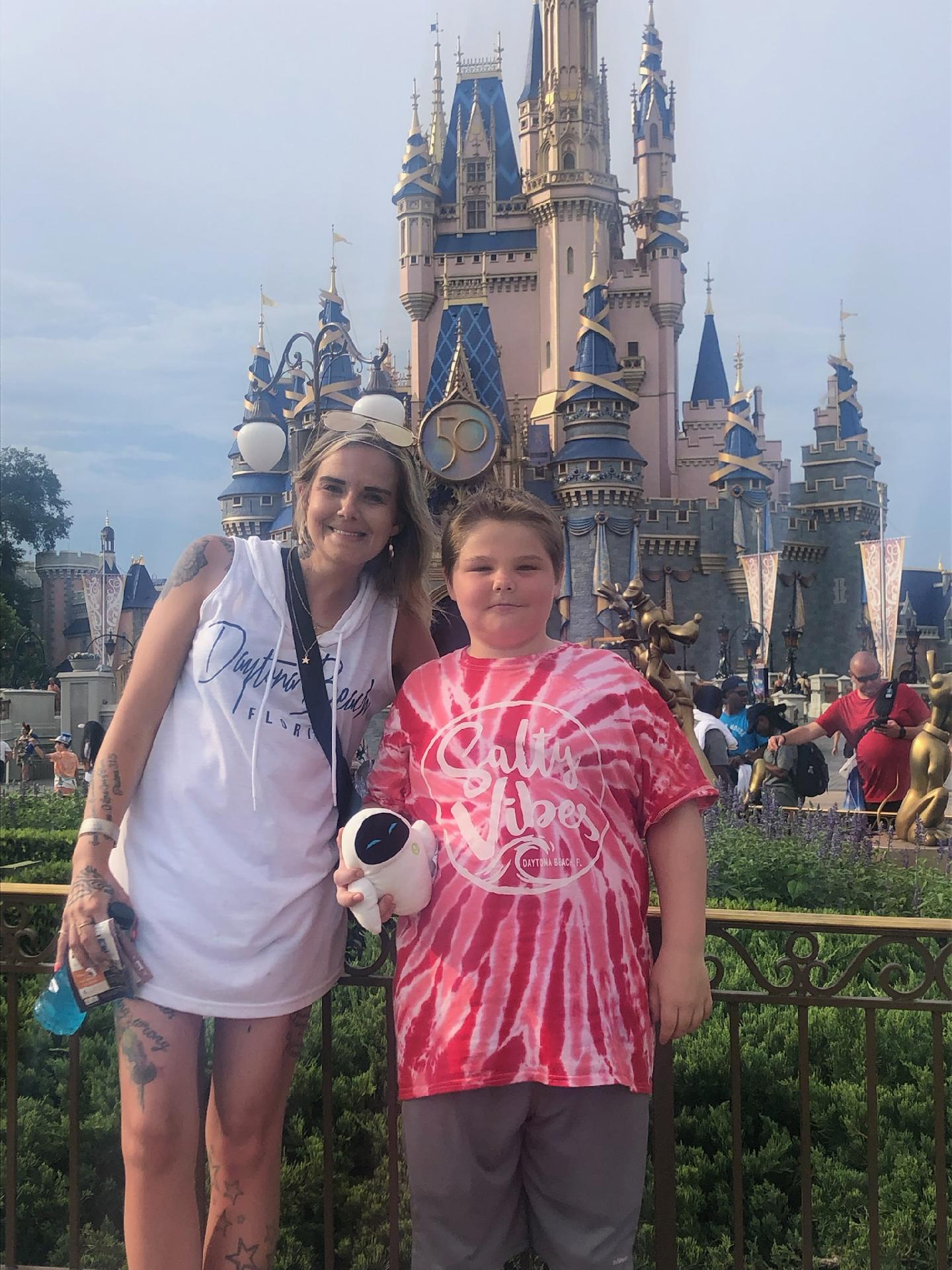 Toumae Best wants to make the most of her final days.

When she became a Rainbow Hospice Care patient in June 2022, Toumae knew time wasn’t on her side. She had developed a tumor on her heart and was also battling a terminal illness. Doctors told her she had anywhere from a few weeks to a few months left to live. She didn’t think she would have an opportunity to take a vacation ever again.

Toumae has been dealing with pain most of her adult life. She was diagnosed with Ehlers-Danlos Syndrome (EDS) ten years ago. Ehlers-Danlos is a group of inherited disorders that weaken the body’s connective tissues. The syndromes are classified into 13 types and Toumae has vascular EDS, which is the most severe form. Her EDS has led to severe gastroparesis, where the stomach empties abnormally slow, and affects her ability to eat and digest food. It has also caused Toumae numerous bowel and bladder issues.

“My body rejects anything and everything,” said Best. “It’s like a domino effect that starts really small and then it gets really big. It affects everything down to your teeth.”

Your tendons, ligaments, and joints become loose, and your skin becomes thin and easily bruised. It can cause your intestines to rupture and weaken blood vessels and vital organs, including your heart. Since that time, her disease has gotten progressively worse.

“It makes you struggle with pain that is unexplainable to most people unless you’re actually in that position,” Best said.

For those suffering from Ehlers-Danlos, they appear to look like an average, normal person. But for Toumae, just having enough energy to perform simple daily tasks is a battle.

“The hardest part of the day isn’t the pain that you live through, it’s the judgment you live with on a regular basis,” Best said.

When her son’s social worker brought up the idea of taking a family vacation in August, Toumae was skeptical it would happen.

It’s been a struggle emotionally and financially for Toumae and her two sons, Brayln and Onan. Monthly bills started to pile up when she was forced to quit working because of her disease. Most days, her energy level is low, and her pain is unbearable.

Toumae’s mother, Kathy Wehrspann, serves as her primary caregiver and stays by her side as much as possible. It’s been heartbreaking for Kathy to see her daughter going through this tough journey and knowing that any day could be her last. 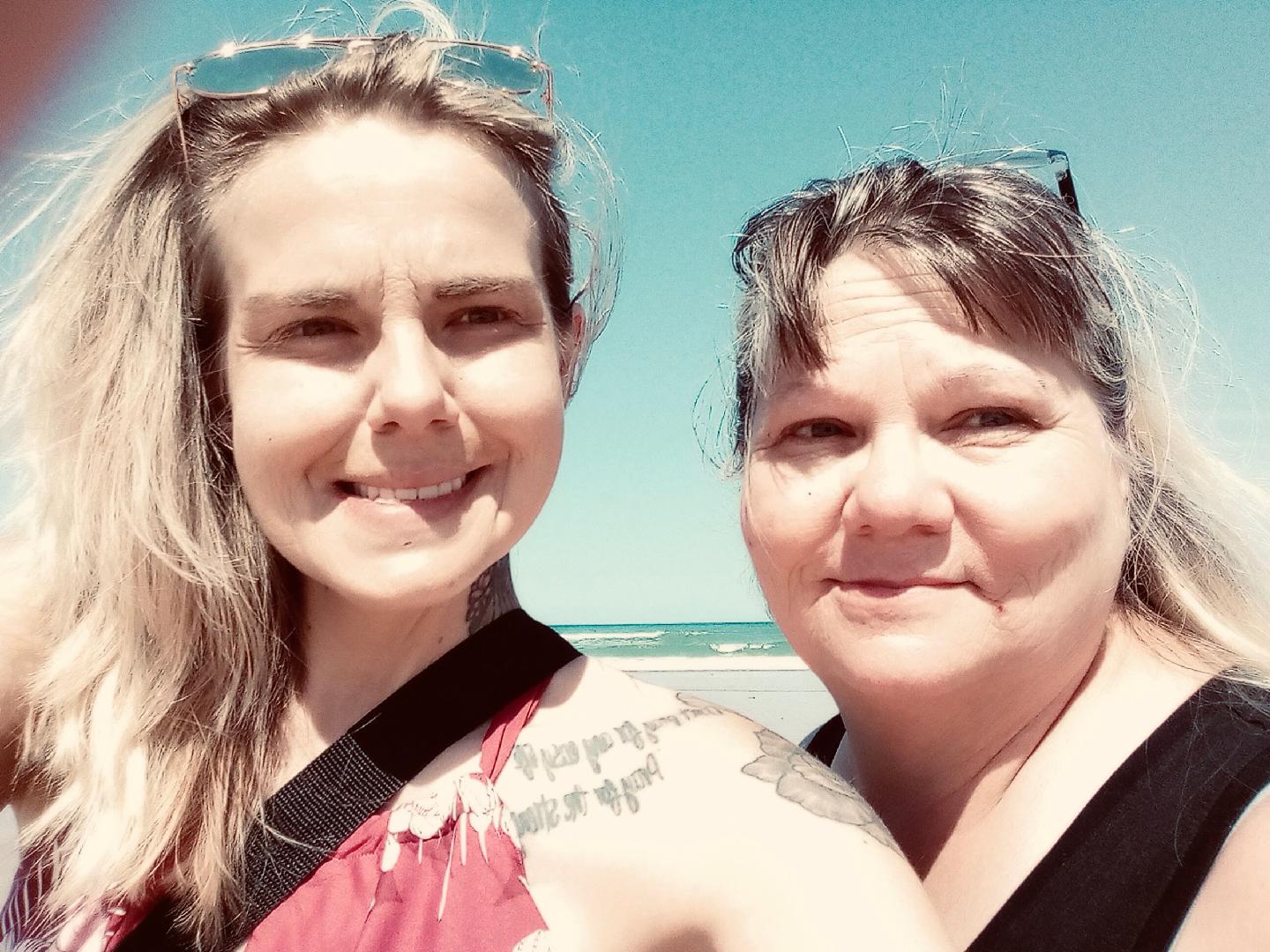 Toumae with her mother Kathy on the beach.

“It’s been really hard to see her get sick and continue to get sicker,” said Wehrspann. “She’s got a special glow and brightness about her. She can make you smile, make you laugh, and she has a huge heart. I’ve always felt very blessed that she’s my little girl.”

Toumae had a brief stay at the Rainbow Hospice Care Inpatient Center in Johnson Creek in July to manage her pain. After that, she had a pain pump installed, allowing her enough relief so she could participate in more activities with her family.

Toumae then reached out to a family friend, Bonnie Manly, and mentioned the possibility of wanting to take a trip with her 10-year-old son, Brayln. Bonnie offered Toumae the use of a timeshare in Florida and said she could stay there for over a week for free.

It sounded too good to be true. At the top of Toumae’s bucket list was to see the ocean again and to take her son swimming with dolphins.

Through the help of St. Bernard Parish in Madison and Orion Family Services (a non-profit that delivers mental health and community-based services to children and families), $500 was raised and paid to Enterprise for a car rental so Toumae and her family could drive down to Florida and return home.

When Rainbow RN Case Manager Jodie Ritsch and Rainbow social worker Melissa Meboe heard about the idea during their visits, they wanted to do everything they could to help Toumae take that family vacation.

“Toumae would light up whenever she discussed the possibility of her family’s trip to Florida,” said Ritsch. “Her smile went from ear-to-ear when she talked about sharing those special moments with her son. That is all it took for me to realize I need to do anything and everything in my power to make this dream come true for Toumae and her family.”

The condo just happened to be available in a few days, so that meant everything had to happen quickly with just the final puzzle piece of additional funding that needed to be put into place.

Melissa and Toumae got to work on filling out an application and writing a letter to the Dream Foundation asking for some assistance with travel expenses for Toumae and her family. Like the Make-a-Wish Foundation that grants children living with terminal illnesses wishes, the Dream Foundation does the same for adults and their families by providing end-of-life dreams that offer inspiration, comfort, and closure. They’ve catered to 32,000 terminally ill adults over the past 25 years.

It didn’t take long before Melissa and Toumae received a response.

“The Dream Foundation responded to me the very next day and wanted to do what they could to support her,” said Meboe.

The Dream Foundation approved Toumae’s application and granted her wish by sending her a $500 check to help with not only the cost of traveling down to Florida, but also gave the family some extra spending money to use on their getaway.

Besides the money, the Dream Foundation also sent Toumae two boxes. One had a t-shirt in for her, and the other had a box with some items for her son, including a hat, Lego set, and two different figurines.

“Every corner of both boxes was decorated,” Best said. “Each of them was painted, and they looked so amazing.”

Getting Toumae down to Florida was the next step. Leaving the state of Wisconsin with her pain pump created some complications that needed to be ironed out before Toumae could leave. With the help of so many people, including a family friend, a church, and the Dream Foundation, the trip idea was put into motion. Rainbow Hospice Care then used an entire team effort, which required a lot of persistence and constant collaboration to help make the trip a reality.

“Jodie (Ritsch) worked so diligently with the UW pharmacy to make sure that doses of medication she needed were accurately calculated and created in a way that she would be well-served her entire trip,” Meboe said.

Rainbow Medical Director Dr. Thomas McGorey also helped to take care of the logistics of maintaining Toumae’s pain pump. Melissa then coordinated with SMS (Specialized Medical Services) to make sure Toumae had a travel oxygen supply available in case there was an emergency while she was traveling in the car.

“There was a lot of prepping and planning, and we did that all in an eight-day time frame and got Toumae out the door,” Meboe said. “We had a lot of meetings with our management team to make sure that all our T’s were crossed, and I’s were dotted so that Toumae would be well supported. It was incredible.”

Melissa also reached out to a Halifax Health Hospice in Florida, and they agreed to do a travel contract with Rainbow Hospice Care.

“They were available to her as hands, eyes, and ears to assist us with anything that might come up,” Meboe said. “Toumae only needed one visit from them while she was down there and that went really well.”

The triage nurses at Rainbow also called Toumae daily to check in, make sure she remained comfortable and determine if there were any other medical needs.

Everything had come together. On August 12, Toumae, her son Brayln, along with her mother Kathy and her best friend Andreas, set out on their road trip to Florida.

“I don’t think any of us really had time to think about it because it happened that quick,” Best said. “Just driving down and getting through that was amazing.” 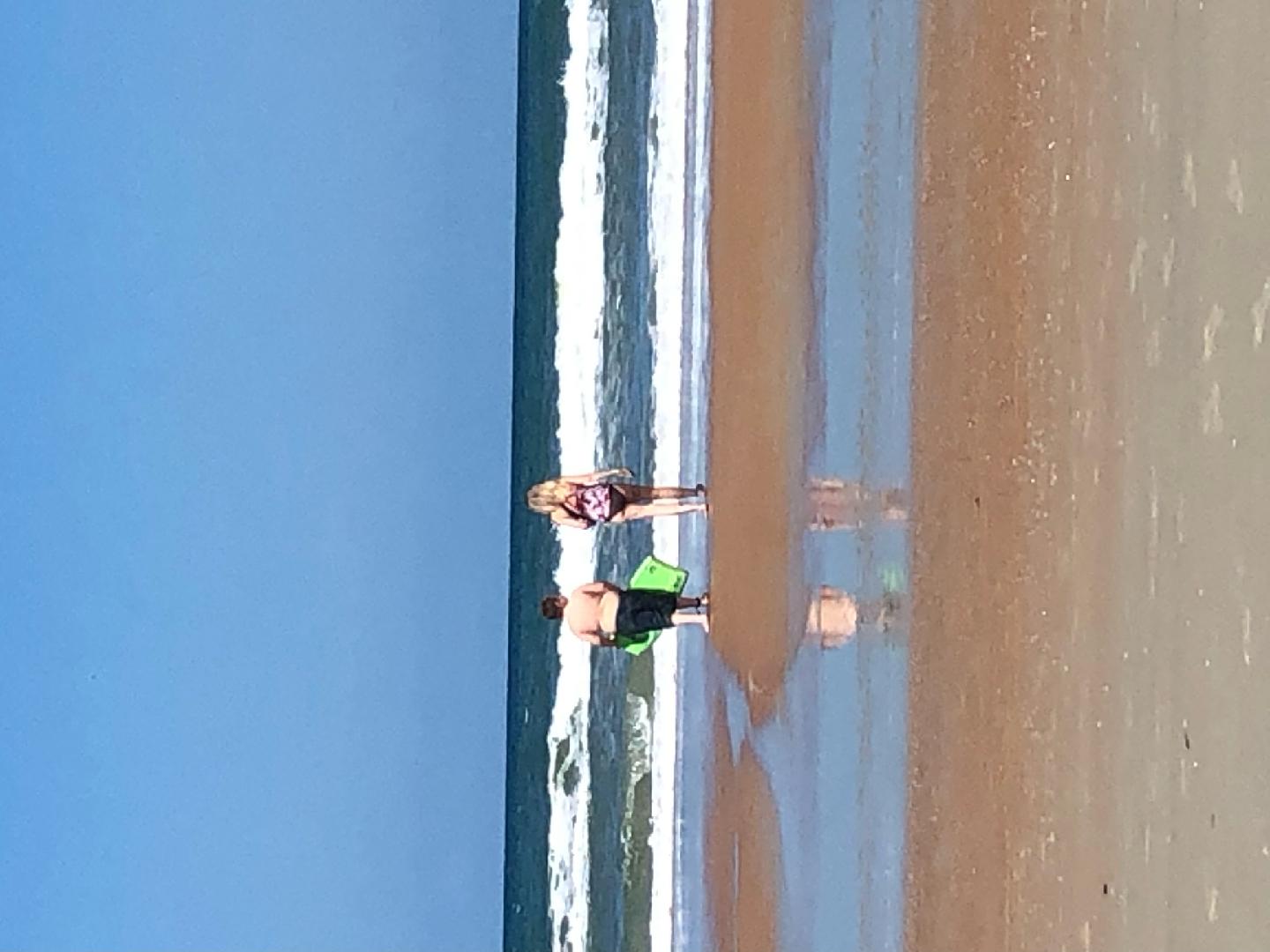 When they arrived, they found a two-bedroom, two-bathroom condo waiting for them, complete with a patio and kitchen that overlooked a private beach.

They jammed as much fun as they could into their ten-day trip, including making a visit to Disney World. Toumae and her family also had the chance to go out to eat at a nice restaurant, do some shopping, and go sightseeing. Another one of the highlights was driving up and down the coast by Daytona Beach and seeing the famous racetrack, the Daytona International Speedway (home of the Daytona 500). But the most memorable part of the vacation was getting to go swimming with dolphins. 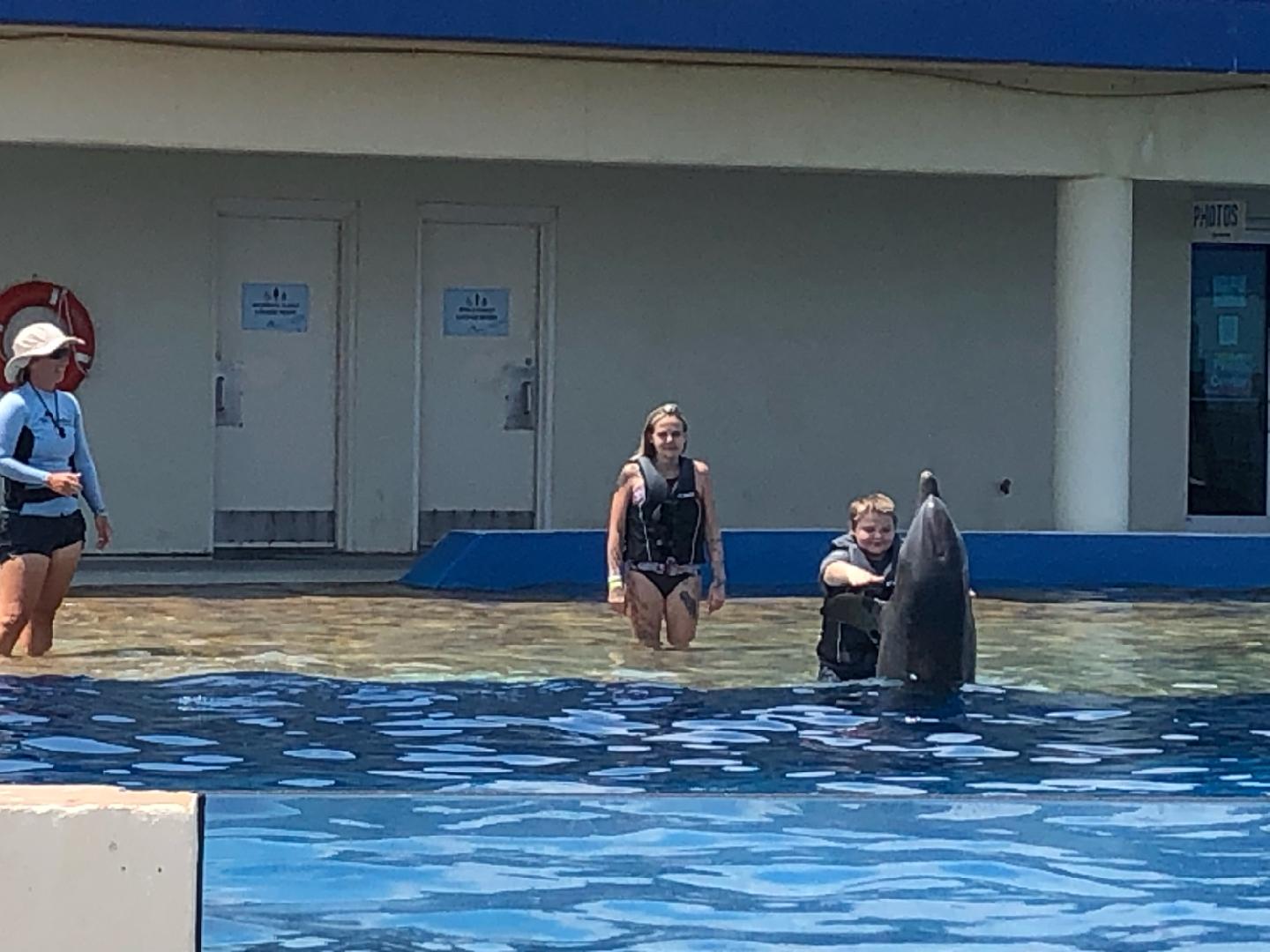 “I never thought it would be possible, so it wasn’t on my bucket list, but my son had it on his list,” Best said. “It’s totally different from what you would expect, and the dolphins are just so brilliant and how they interact with humans. It’s just a special feeling to share that with my son and see the smile on his face. That’s a memory I get to carry in my heart forever.”

The family spent most of their time in Florida at the condo on the beach. They took in the sounds of the crashing waves and felt the warm sea breeze and sun on their faces as they witnessed the beautiful sunrises and sunsets.

“We had some storm clouds roll in and we all stood on the patio and just watched them and that seems simple, but it was great,” Best said.

Toumae’s friend Andreas also documented the entire trip with pictures and video so she can relive those moments forever.

After returning home to Wisconsin from her long journey, The Dream Foundation personally called and checked up on Toumae.

Even though her EDS has slowed Toumae down at times, it hasn’t stopped her. She’s described by her mother as a fighter and a free spirit. That’s fitting because her name Toumae means free spirited.

“She hated that name when she was little, but she loves it now,” said Wehrspann. “I named her Toumae because I wanted it to be different and not so common because there’s so many Suzie’s and Kathy’s out there. I kept telling her, you’re unique and enjoy the name you have.”

When Toumae thinks about the future and is overcome with emotion, she finds strength in the words of Psalm 31:5, which is tattooed on her right arm. “Into your hands I commit my spirit; deliver me, Lord, my faithful God.”

Every second, every minute, and every day she has left in life is a bonus for Toumae and her family. 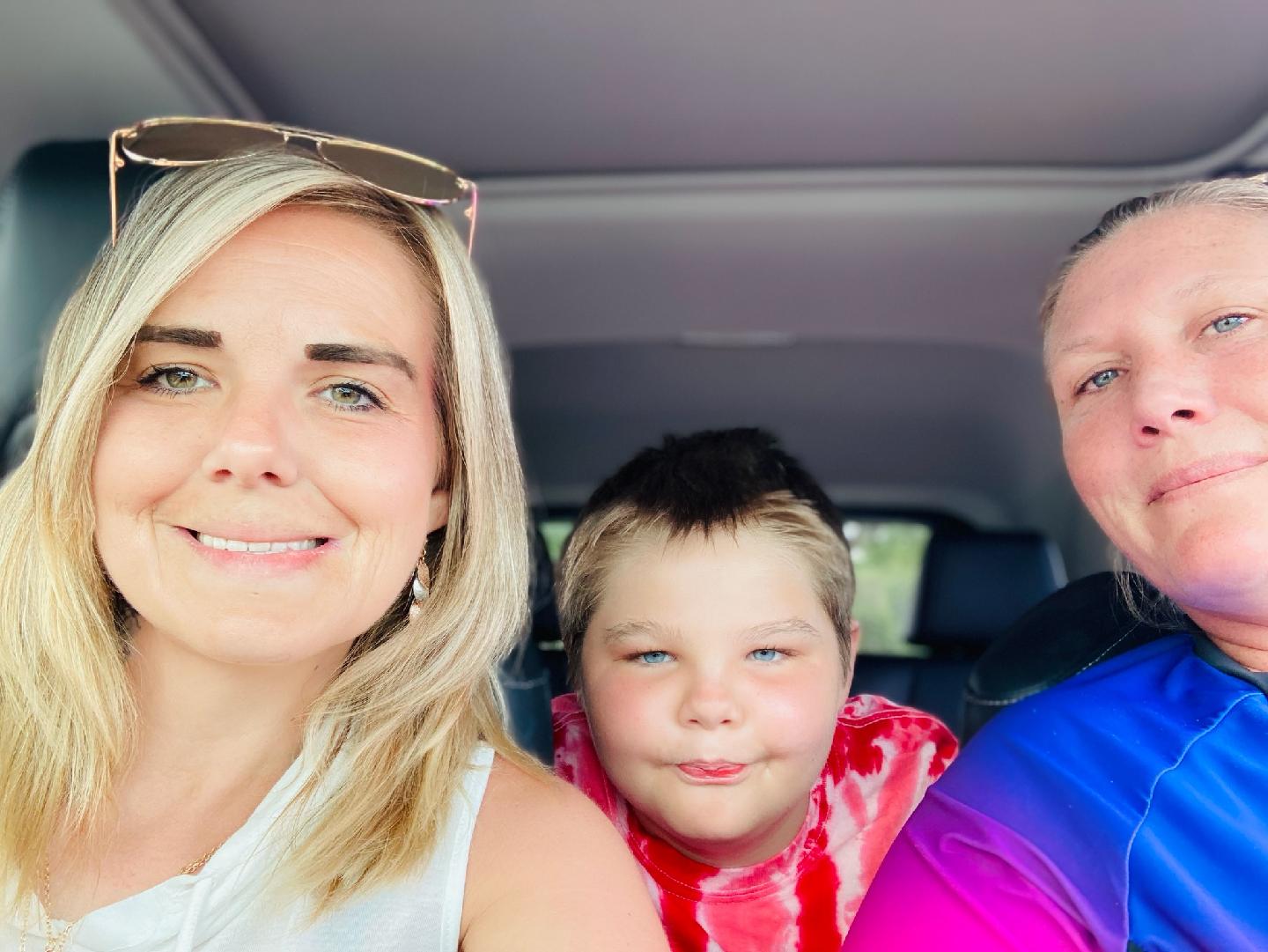 Toumae, her son Brayln and her best friend Andreas on their road trip.

“I didn’t think I had the time,” Best said. “I’m beyond appreciative that my son and I were given this gift by so many people. I was afraid my son’s last memories of me will be of me in pain, but this was something so special and magical that we got to share together and bond over.”

What Toumae will remember most about her “Dream” vacation is being able to enjoy some quality time away with her family, with the beautiful backdrop of the Florida beaches, and not having to focus on her disease and the stress of everyday life.

When the time does come for her to say goodbye to her family, Toumae can now take some peace and comfort in knowing that they can remember that special time together in Florida. It was never about the destination. It was the hope of creating happy memories for her son, instead of ones filled with sadness. No one can take those moments away from her or her family.