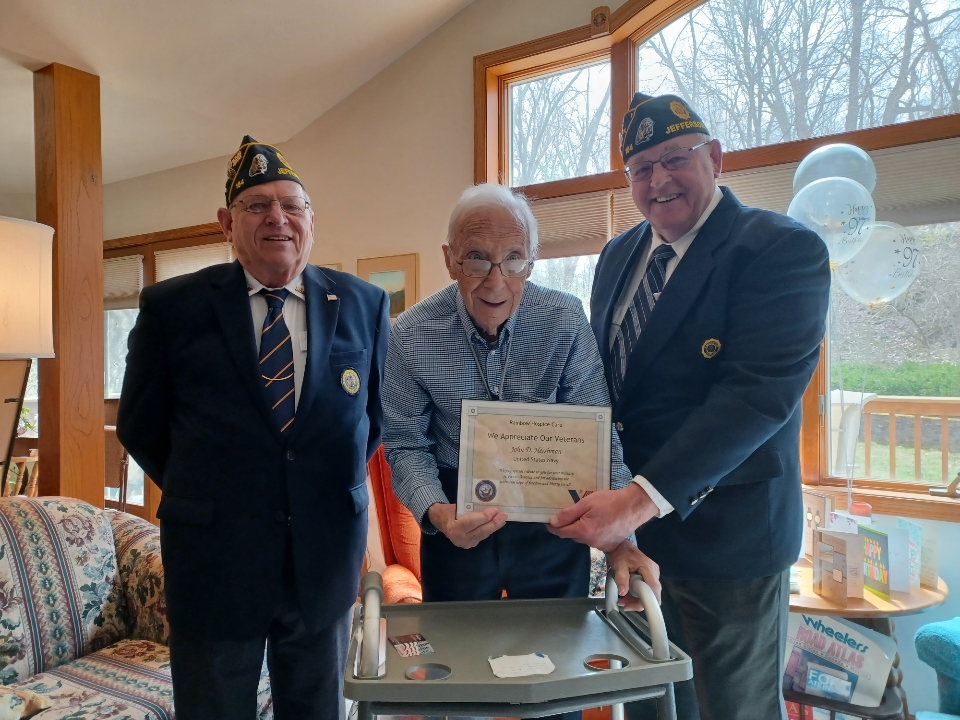 Juan Phillips (left) and Robby Robinson (right, Rainbow Hospice Care volunteers and members of the American Legion Post 164 in Jefferson present Rainbow patient and veteran John Hershman with a veteran certificate of appreciation at his home in Fort Atkinson.

For many of us, Memorial Day has become a rite of passage, which usually consists of a day off work, and a long weekend filled with cookouts, swimming, boat rides, or a quick camping trip to signal the unofficial start of summer. But we often forget what the day is really all about. That it’s a day to honor all the men and women who sacrificed their lives and died in U.S. military service for our country and for freedoms that we sometimes take for granted.

“When I took over, I said I’d be the commander for two years and it’s been a lot longer than that,” said Robinson.

He urges more citizens to attend their community’s celebrations to observe the special holiday and volunteer in the festivities.

“You are honoring all the people that were killed in action or during their service,” Robinson said. “It’s not about the people that are serving now, it’s all the ones we lost.”

Most area cities, towns, and villages have Memorial Day traditions which can include solemn ceremonies at a park or cemetery and public parades or programs to commemorate the day. American flags will fly at half-staff, before being raised to full height from noon to sundown. Veteran gravesites will also have flags placed on them to remember all our fallen heroes.

It’s important to remember those that we have lost, but Memorial Day is also an opportunity to show support for our living veterans. There aren’t many World War II veterans left, and we are also losing Korean War veterans at an alarming rate.

Robby will soon step down as the commander of the American Legion and is also getting close to retiring from his part-time job. That will allow him to devote more of his time to Rainbow Hospice Care, where he’s been serving as a volunteer for over four years now. He’s done a little of everything, from mowing lawns at a patient’s home to playing cards with patients up at the Rainbow Hospice Care Inpatient Center in Johnson Creek. But his favorite part of being a volunteer is participating in veteran pinning ceremonies for Rainbow Hospice Care patients.

Robby along with two other American Legion members, Juan Phillips, and his brother-in-law Larry Whitmore, has taken part in several Rainbow pinnings and they never get old.

“The people I’ve visited with have been phenomenal,” Robinson said. “They have a lot of great stories to tell.”

Robby’s latest pinning on April 29, 2022, especially was a great honor for him to be part of and he’s happy he could fit that one into his schedule.

“It seemed like every time Rainbow had one scheduled lately, I was working,” Robinson said. But Juan (Phillips) was telling me about this one and I just happened to be off that day. I was very excited to go see this one because older veterans are just so interesting to listen to and you learn so much.”

Robby and Juan made a trip to see Rainbow Hospice Care patient John Hershman at his home in Fort Atkinson.

“John didn’t remember a lot anymore about his war years, but we were really happy to talk to him,” Robinson said. “We were able to have a nice conversation with him and his family.” 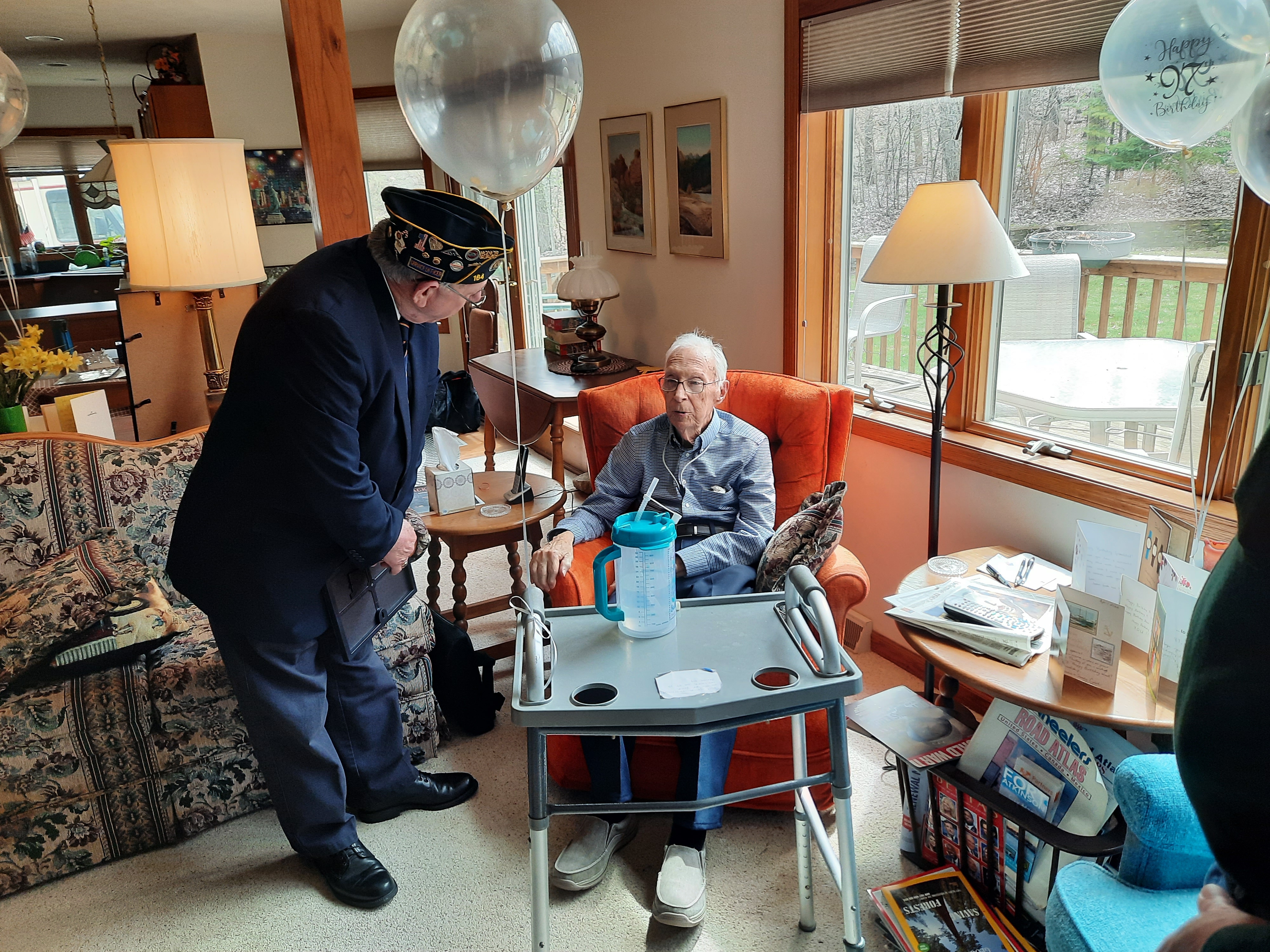 Thankfully, John’s son, Dave Hershman, was there to fill in some of the missing blanks about his dad’s life and time in the military. Dave’s wife, Cynthia, and his sister, Nancy Onufer, also got the chance to see “Dad” pinned and honored for his service to his country.

“I was proud of him, that he was alive and knew what was happening. His health has been getting very touchy lately, and we were just delighted that he got that recognition,” said Dave Hershman.

John Hershman was 17 years old and fresh out of high school when he enlisted in the Navy in 1942.

“He and a couple of his high school buddies enlisted together, and his mother had to sign the papers to give him permission since he was not yet 18,” Hershman said.

Following boot camp at Great Lakes Naval Base in North Chicago, Illinois, they assigned John to a school in Toledo, Ohio, where he learned to be a storekeeper. After graduation, he left for San Francisco to be put on a supply ship bound for the South Pacific. It was less than a year after the Japanese had bombed Pearl Harbor and catapulted the United States into World War II.

It was a life unlike the one he had left behind, growing up on a farm in Indiana.

“I’m not even sure if he had been out of the state before that,” Hershman said.

John worked on the Navy ship as a supply officer where he distributed materials and supplies to all Allied forces down in the South Pacific, not just the Americans. He spent the final duration of the war at Manus Island, Papua New Guinea, about 200 miles north of New Guinea and to the Northeast of Australia, where a convoy of Allied ships set up a supply depot. Manus Island served as a major fleet base for Allied forces during World War II and played a key role in the campaign to retake the Philippines from the Japanese. Thankfully, any enemy fire John saw at sea turned out to be minor. 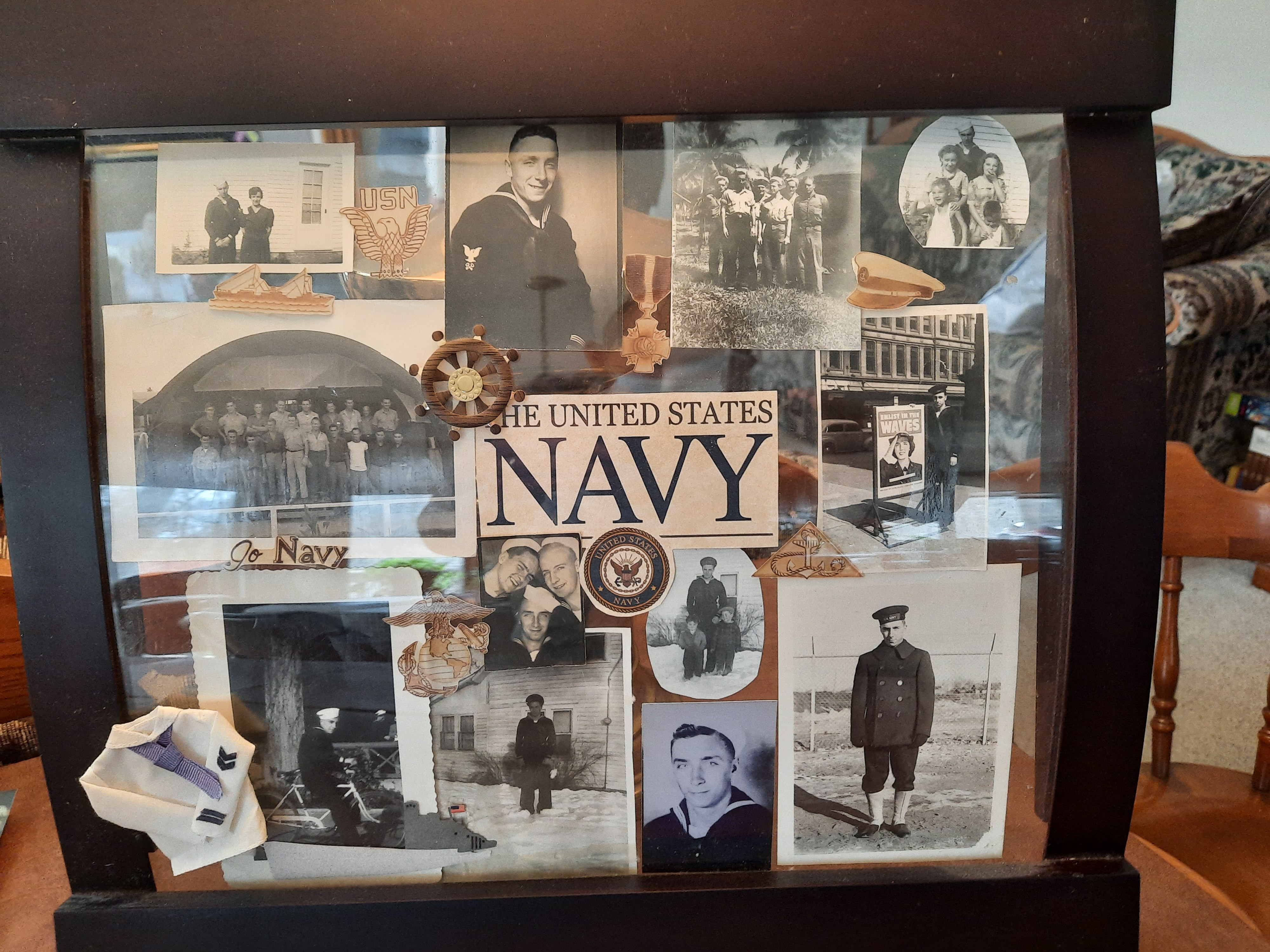 “Dad mentioned there were a couple of occasions where some ships hit mines in the harbors surrounding Manus Island and blew up, but he wasn’t involved in any of the retaliatory action,” Hershman said. “He was handing out the uniforms, bullets, and underwear. He was in the material supply business line of work.”

When World War II ended in August 1945, John enrolled at Purdue University, then transferred to Indiana University to study Business Administration and Accounting.

“It was an offshoot of what he had been doing in the Navy, with inventory control and all that kind of work,” Hershman said.

John then met his future wife, Ann, and they were married in 1949. Three of their four children (Nancy, David, and Teresa) were born in Indiana before the family moved to Fort Atkinson in 1957 when John took a new job at The Creamery Package Mfg. Co. (which later became Crepaco). A company promotion required the family to move to Chicago in 1964 and that’s where John and Ann welcomed their fourth child, Tim. Nine years later, they were back in Wisconsin again for John’s job at APV Crepaco in Lake Mills. He has remained in Wisconsin ever since, even though he is still a Hoosier at heart. 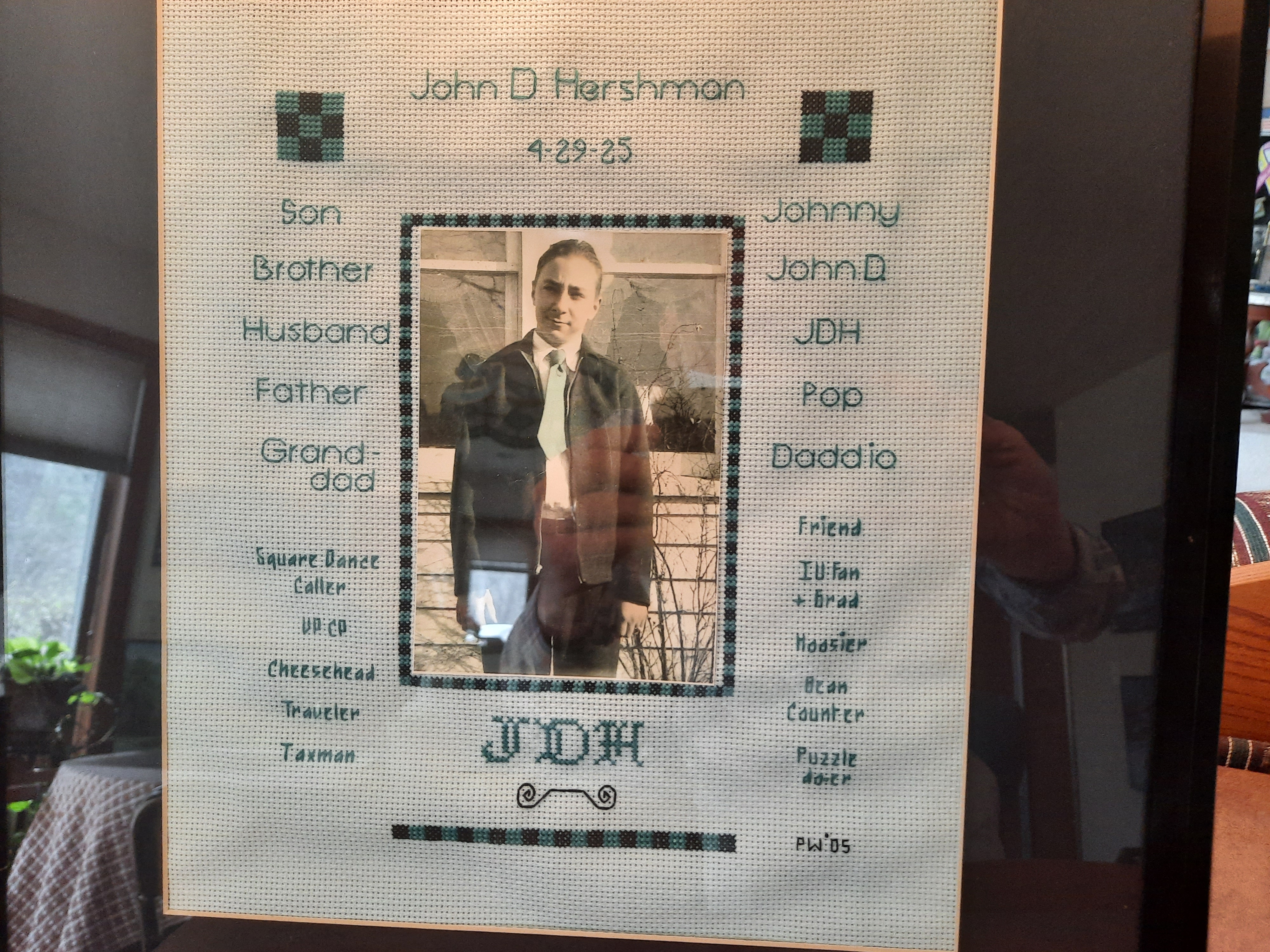 Growing up, it didn’t sink in for Dave the significance of his dad’s dedication and service to his country. But now that he has gotten older, he appreciates that his dad was an important part of this changing period in history.

“When I stop and think what he did, the commitment that he and other young people made to sign on the dotted line and go off to war, I couldn’t imagine making that commitment at 17,” Hershman said. “Nowadays, guys who serve on the other side of the world can call on their cell phones. That was unheard of back then. You wrote a letter to your family, and it didn’t get to them for a couple of months.”

John didn’t talk often about his time during the war, but when he did, he always spoke fondly of his time in the South Pacific.

“He liked that kind of tropical climate, sandy beaches, cute girls, and all that,” Hershman said. “When the musical South Pacific came out, he really identified with that because it was just a different world than what he was used to growing up.”

Now, 77 years after World War II, John received a special “thank you” for his service, with his family by his side. What made it even better was the pinning ceremony took place on John’s 97th birthday and turned out to be a big surprise.

“We didn’t tell him beforehand because we thought it would be more a highlight and would give him a little extra celebration for his birthday,” Hershman said.

Unfortunately, John’s wife, Ann, couldn’t be there for the ceremony, as she passed away after a long courageous battle with Parkinson’s disease in September 2011 and his daughter Teresa died unexpectedly in December 2007. But the Hershman family now has pictures of both Juan and Robby presenting John with a veteran certificate and a Navy-themed tie blanket, made by Rainbow Hospice Care volunteers, along with some meaningful memories from that day. These are keepsakes that the family will treasure forever and are thankful for the Rainbow Hospice Care volunteers from the American Legion.

“They did a wonderful job, and they knew how to speak to him,” Hershman said. “Knowing how old he is and that he might have forgotten things, they were very understanding and great with the way they handled it.”

As more veterans continue to pass away, it’s becoming even more important to remember their brave service, the ultimate sacrifice they made, and preserve their memories. From the beaches of Normandy to the jungles of Vietnam, to the deserts of the Middle East, their stories, many untold, can live on in future generations and educate us about their time in the military, or they could end up being lost forever.

“The people who are the Greatest Generation, the World War II generation, they certainly need to be honored for their deep commitment,” Hershman said. “It had to be an overwhelming sense of patriotism and need for your country, to cut yourself off from your family at a young age is such a remarkable thing and the older I get, the more I feel the need to honor all the people who have done that for the country.”

Rainbow Hospice Care has been a proud partner of We Honors Veterans, a program of the National Hospice and Palliative Care Organization in collaboration with the Department of Veterans Affairs, since 2014. Its focus is to increase awareness, improve the quality of care for veterans in our communities, and honor those who have served when they reach the end of life.