Not a day goes by that Dennis Dick doesn’t think about his wife Jeannie. When she passed away over a year ago, Dennis lost a part of himself too. But Jeannie is still in his heart and he feels her presence every day.

“I feel and see her in so many aspects of my life and in how I do many things, even how I hang the bath towels,” said Dennis. “I know she is still with us.” 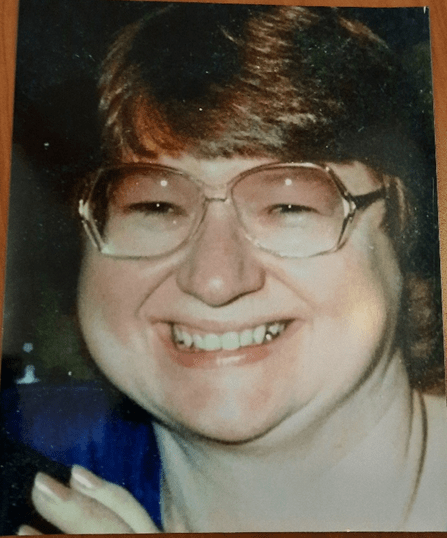 Jeannie Dick
Life isn’t the same for Dennis, their three children, or eight grandchildren without Jeannie. Anniversaries, birthdays, and holidays have gone on, but the pain and grief haven’t gone away. Dennis though has learned to cope and live life without Jeannie.

“A lot of people say it will get better, but the ones that say it’s going to get better have never experienced the loss of a spouse,” Dennis said. “You just kind of adapt to a different way of doing everything.”

He remembers everything they shared through 34 years of marriage and how much she could light up a room.

“She was my best friend, soulmate, and the love of my life,” Dennis said. “I know everyone has memories of her, and all of those memories surely include her wonderful smile.”

Even when Jeannie was diagnosed with brain cancer, she never lost her love for the outdoors, being with her dogs, and watching all the animals and wildlife. Jeannie especially loved being around water. She and Dennis took a vacation to Hawaii and the highlight of that trip was getting to swim with the dolphins. Pictures remind him of those special memories.

At their old house in Greenfield, Dennis built Jeannie a pond with a bridge and she spent hours after a long workday enjoying the peaceful setting and feeding the goldfish they purchased for the pond.

“Jeannie really, really loved that,” Dennis said. “She missed that when we moved away from that house.”

Dennis regrets that Jeannie can’t be here now to experience that same kind of peacefulness and serenity. They had just moved into their new home in Watertown that has a retention pond nearby and less than a month later in October 2020, Jeannie signed onto Rainbow Hospice and passed away on December 13, 2020. 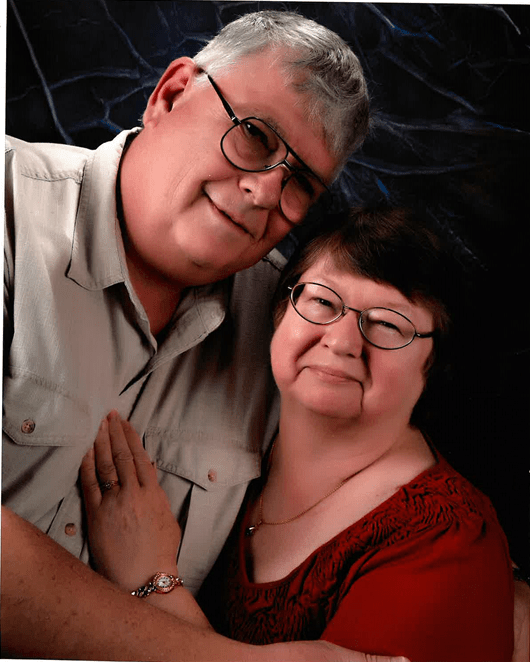 Dennis Dick and his wife Jeannie.
Grief support from Rainbow’s spiritual care team has become a blessing for Dennis since Jeannie’s passing. He regularly attends Monday Morning Joe, a special group that Rainbow Bereavement Counselor Laura Wessels leads each week at the Rainbow Hospice Care Inpatient Center for those who’ve lost loved ones. That interaction with others who have also experienced loss has helped Dennis in managing his grief.

“It made me realize that I’m not alone in dealing with this,” Dennis said. “I guess I always knew that. Everybody loses family members, but losing your better half really puts the whole loss in perspective.”

There are so many things that Dennis misses about Jeannie. From their drives in the country to their visits to the Black Hills in South Dakota, Jeannie loved taking in everything nature had to offer.

“That was one of her favorite places to visit,” Dennis said. “We’d go to Bear Country in the Black Hills and she could spend hours watching the bear cubs roll around, and play and wrestle. Any new life thrilled her. She took care of feral cats and loved looking for ‘puppy’ cows, horses, or any newborn animal. In the spring when we’d come home from work, she’d walk around the house and come in and tell me how many tulips were up.”

Mostly Dennis just enjoyed sitting and watching television and just being with her. What’s made it tougher for Dennis to adapt to living life without Jeannie is living in a new city and not knowing many people. But attending the weekly grief group and some other bereavement events had made him more comfortable. Dennis has also been going out to meet new people and has made some new friends in Watertown.

“One of the things that a lot of people that are in this group have that I don’t have is friends that they’ve had for years because they’ve lived here,” said Dennis. “I’m experiencing things in and around Watertown that I would have liked to have done with Jeannie, but I’ve got support from my new friends and from Laura and from the group to be able to get on with life.”

Dennis has also been able to get through the hard days by sitting at a park and thinking of Jeannie.

“I think the serenity of water features, whether it’s a pond or a fountain, or if I go to a park that’s got a fountain it helps me get by or get through the difficult days or weeks,” Dennis said.

This past fall during Morning Joe, Laura shared how Rainbow wanted to transform the outdoor space into a place of peace and tranquility. Dennis knew he wanted to honor his wife’s memory somehow but he wasn’t sure how. After thinking it over, Dennis decided what the perfect way would be for him to give back to Rainbow and remember Jeannie at the same time. Laura set up a meeting with Dennis and Rainbow’s President/CEO Karen Carrig to discuss him making a $5,000 donation. 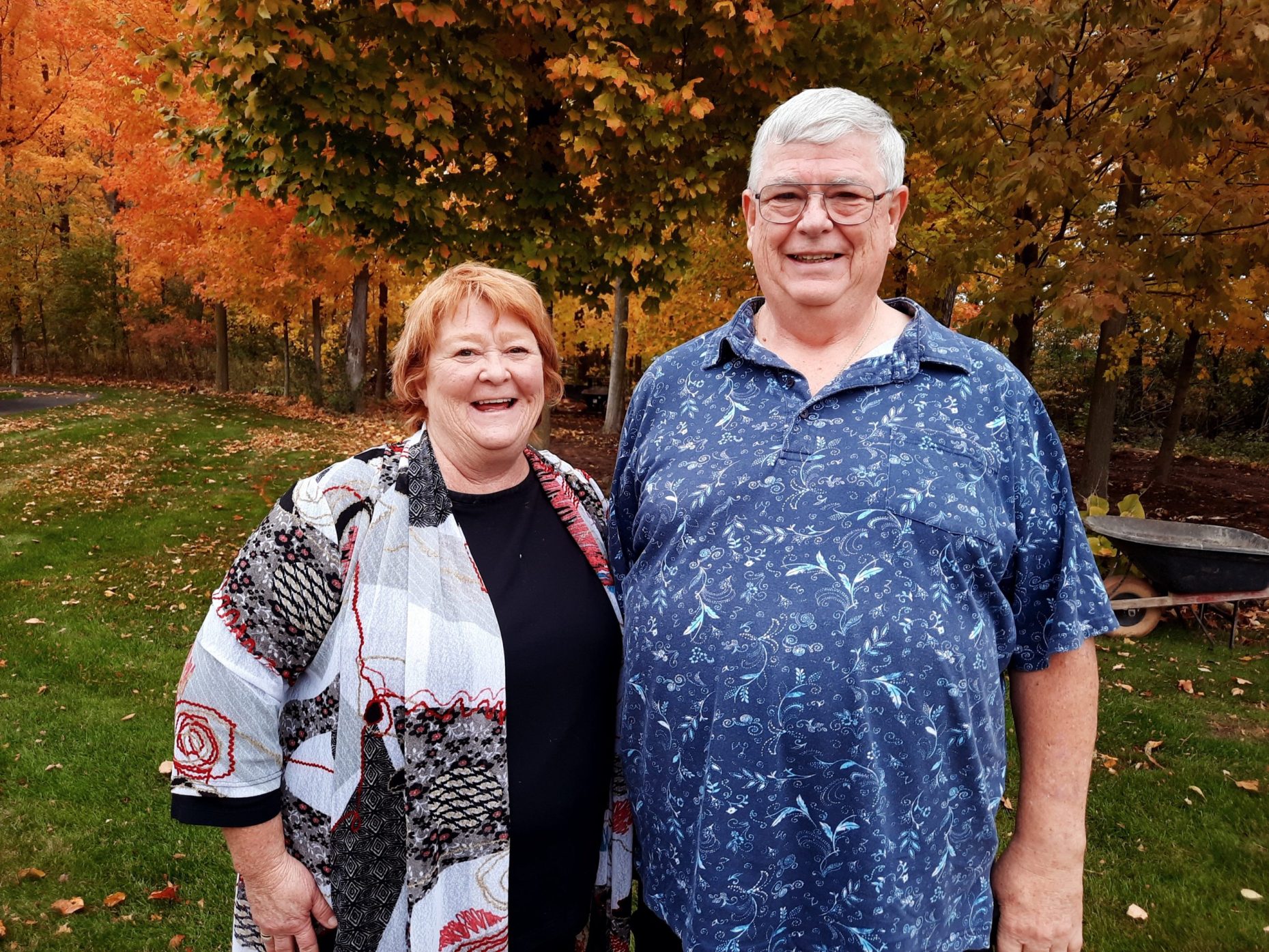 Dennis Dick with Rainbow Hospice Care President/CEO Karen Carrig.
Dennis’ $10,000 donation will go towards the purchase of a water feature that will also serve as a centerpiece of a newly designed outdoor memorial space. It will give patients and their families a place to gather in solitude and relax with nature all around them.

“Jeannie would like the fact that it’s designed so people can come out there in a wheelchair or walker because she spent a lot of time the last ten years using a walker,” Dennis said. “She’d like the peacefulness of it and seeing the birds and squirrels and everything else. The water feature I know that she would sit there and watch it and appreciate that.”

“I know how important it has been for Dennis to remember Jeannie,” said Laura Wessels. “I’m overjoyed for Dennis to have an opportunity to memorialize her and know that he found joy in the fact that it was the water fountain that would have her name on it. Dennis gets to make meaning of Jeannie’s life with this donation.”

Jeannie received home hospice care from Rainbow and never transitioned to the Inpatient Center in Johnson Creek, but Dennis thinks she would ultimately approve of his donation to give Rainbow an outdoor makeover to go along with the quality physical, emotional, social, and spiritual care that patients and families are receiving inside the IPC.

“Jeannie might have told me initially that I was crazy for doing this,” Dennis said. “Once the project is done and she could see what it had become and the value it is for other people, then she wouldn’t think I was so crazy.”

Patients and families won’t get the opportunity to meet Jeannie, but her memory will leave a lasting legacy at the Rainbow Hospice Care’s Inpatient Center. Dennis hopes that the space becomes a special gathering place for patients and their families. 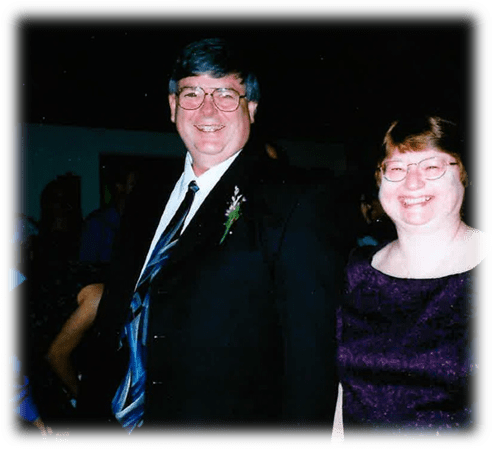 “They’ll see a plaque that’s in her memory and I’m sure everybody will have a different interpretation of it,” Dennis said. “I hope people thank her, but I don’t want them to grieve for her, because they’re grieving for their own loved one. I want people to look at this whole area and feel at peace and feel that they’re loved.”

Families and friends now create a lasting footprint at the IPC by purchasing memorial bricks in honor of or in memory of their loved ones. They also don’t have to be a current or past patient at Rainbow Hospice Care.

“It just was a no-brainer to give people who are here with a loved one a place to go to reflect,” Dennis said. “If I can give that feeling of comfort and serenity to just one person that benefits me.”

“We are looking forward to using the outdoor space for many sorts of gatherings include grief rituals around the fire pit as well as grief walks,” Wessels said. “Truly the possibilities are endless and we are just beginning to imagine them.”

Work has already begun on the outdoor space and Dennis is looking forward to the time later this summer or fall when donors and members of the public can come and view the completed design during a dedication ceremony.

”Knowing what this organization and this facility does for terminal people and for their loved ones, it became very important for me to help Rainbow because Rainbow helped me,” Dennis said.